I saw a comment on Twitter today asking for readers to tell the world which war has ever been worth it. The tweeter would then reply with arguments countering the statement. When told that World War 2 was worth it, the tweeter replied that millions of Jews died before we ever made it into Europe.

At this point in time I stopped following the feed. This type of straw man argument isn’t something I’m interested in. I have no issue with those who believe war is morally wrong. It’s a difference of opinion, and frankly those differences are what make the world go around.

War is a very complex subject that ties in morality, religion, money, power, and territory. Any argument which tries to break war down into something simple is typically missing the way these complex issues interact. One man’s war for territory is another man’s war for freedom. Trying to establish worth or value to any armed conflict is doomed to fail. If you believe that the loss of a single human life is not worth it, then war will never, ever be a worthy endeavor.

Freedom, both economic and physical comes with costs. For the millions of Jews who died before the physical invasion of Europe, millions more were saved. That also ignores the impact of the Japanese on the Pacific Rim. Japan engaged in extreme acts of violence against Korea and China in the build up to World War 2. During the American Civil War, more Americans died than in any other armed conflict in history.  The families of those 600,000+ Americans may have debated the validity of the sacrifice. “What if ” historians will periodically argue that the US would have moved away from a slave based economy in the South eventually. Yet that view ignores another major component of the war, the right of states to determine policy in lieu of the federal government. Think it’s not relevant today? Check out Arizona’s immigration law or Texas’s attempt to make TSA screeners criminally liable for pat-downs.

Using modern definitions, the American Revolution was a terrorist insurgency. The list could go on and on. We could look at the impact of the Hundred Years’ War on the map of Europe. We could discuss the conflicts raging across the middle of the African continent. The bottom line is trying to define wars as worth causes is a loaded issue. There are just too many variables involved.

For now, war is a part of the world we live in. One day that may change.  For me, I choose to honor those who serve. In my world view, their sacrifice allows me to sit here waxing philosophical on a Monday in May. 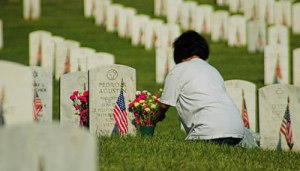 1 thought on “Memorial Day, the cost of war”

My Tweets
Join 1,154 other followers