Thomas Carson Griffin died February 26, 2013 at the age of 96. Griffin was one of eighty remarkable men who took part in one of the most impressive acts of airmanship in the 20th Century. He was a Doolittle Raider. 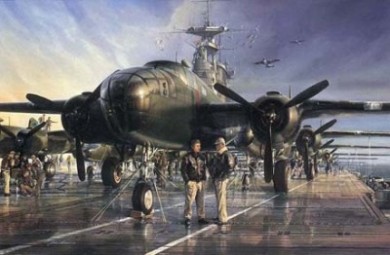 The Doolittle Raiders have long been a part of my personal history. My Dad had a series of books written in the 1950s that my brother and I inherited as children. One of these books was a history of the Doolittle Raid. I read the story over and over again, memorizing details, and dreaming about planes and heroes. It was one of several books that fueled my like long love of the military.

The 1942 Doolittle Raid (also known as the Tokyo Raid) was a direct response to the attack on Pearl Harbor. The purpose of the Raid was to boost American morale by showing that Japan was vulnerable to air attack. The daring raid was planned and executed by Lieutenant Colonel James Doolittle. Sixteen B-25 bombers were specially modified to fly off the aircraft carrier USS Hornet and deliver their payload on Tokyo.

It was a crazy idea, and required the right balance of crazy, stubborn, and diligent training. You had to be able to get a B-25 aircraft to lift off in 500 feet. Many thought it was impossible. The Doolittle Raiders did it.

The physical impact of the raid was negligible. The psychological impact on Japan was significant. At the time of the raid, Japan was considering attempting an attack on Australia. After the attack, they decided to deploy a fleet to Midway in an attempt to punish the Americans. The Battle of Midway changed the course of the war in the Pacific.

Griffin continued to serve after the Raid, and was shot down over North Africa in July of 1943. He finished out the war in the legendary Stalg Luft III prisoner of war camp.

Each year the survivors of the Raid meet and drink a toast to those who’ve passed and those who remain. This year Thomas Griffin joined those who will be there in spirit.

Lord, guard and guide the men who fly,

Through the great spaces of the sky;

Be with them traversing the air,

In darkening storms or sunshine fair.

Through lonely ways beneath the sky.

History is written by the victors. This axiom has been passed down to students of history in an unbroken chain for years. It’s one of the reasons that primary sources have to be read with an understanding of the time and place. The story of Richard the III is a good example of this.

Richard ruled during a very contentious time in English history. The Wars of the Roses was a 30 year conflict between two rival houses of the British nobility the House of York and the House of Lancaster. Sporadic conflict over the years resulted in a final battle between York and Lancaster at Bosworth Field, the death of York king Richard III, a Lancaster victory, and the eventual rise of the House of Tudor (and the reigns of Henry VIII and Elizabeth I).

Most of us know Richard III through the Shakespeare work of the same name. Over time he’s been portrayed as a nasty, cruel, twisted and broken man. Shakespeare wrote this play during the reign of Elizabeth I, who’s family was the victor over Richard III. This line of the House of York had a weak claim to the throne at the time, and several historians have suggested that Richard was vilified in order to strengthen the claim of the House of York. The Tudors painted a bleak picture of Richard, and with time, historians have helped embellish that story. The victors told a very specific story of who and what he was, and they pulled no punches.

With the discovery of the body of Richard III, the debate has resumed between historians. Some argue that he was a product of his time, and that ruthless acts of terror were par for the course in Medieval England. Others will continue to argue that he was a cruel and evil man. The truth is probably somewhere in the middle.

It’s going to be interesting to watch the story evolve.

My Tweets
Join 1,154 other subscribers