The short answer is nothing. That’s right, it changes nothing.

I went from the legion of Armstrong fans who believed he raced and won clean to the more cynical realization that he’d likely doped and doped in a big way to win. In the months since USADA’s reasoned decision, I’ve reviewed the information and concluded that it’s likely that most winners of the major cycling races in the past 30 years have probably cheated to win. Yes I said 30. I include Miguel Indurain and Greg LeMond on that list. We just don’t know what they did yet, and may never know.

My appreciation for Armstrong’s wins hasn’t changed. That’s right, I haven’t thrown out my Tour de France tapes. I haven’t ripped pictures off my walls, and I haven’t thrown out t-shirts. Why not? Because I benefited from Armstrong’s actions. The motivation and inspiration I got from watching Lance’s story doesn’t go away because he’s a liar and a cheat. Do I go back and throw away physical and emotional achievements that his story sparked in my life?

Do I go back and undo the efforts to run a half marathon because he lied? Do I ignore the workouts I did where I remembered his words, “Pain is temporary, quitting lasts forever?” Do I rail at the heavens and curse his name for the new fitness milestones I hit in my efforts to “Be Like Lance”?

No. That kind of revisionist history is a useless exercise. Am I inclined to be careful if I get a chance to work for the guy? Heck yes. As a long time Armstrong fan, the revelations of the Oprah interview aren’t shocking. You can’t live in Austin without realizing that Lance Armstrong is (in his own words) a prick. He’s human, with major, major flaws.

We keep looking for perfect heroes in this day and age. They don’t exist. I’ve long maintained that if some of our greatest moral heroes were living today, they’d be on the cover of Enquirer and disgraced in a month. Perfection doesn’t exist, we’ve all got major flaws, and hubris can get the best of anyone. Armstrong screwed up and got caught. How many other iconic heroes are out there who haven’t gotten caught yet? Probably too many to count.

Armstrong has people and institutions he needs to apologize to, and make restitution towards. As a fan who saw the writing on the wall a few years back, I’m not on the list. I’m not going to regret donations to a charitable organization that I believe provides a valuable service. I’ve benefited from Lance Armstrong’s lies, if only in a small way.

Those words have been a cornerstone of my life over the past few years. I can’t calculate the impact they’ve had on me. Without Armstrong’s victories, I doubt they would have ever registered.

I wouldn’t change their impact for anything.

Seven time Tour de France winner Lance Armstrong will be stripped of all his victories since 1998 including his seven Tour de France victories. This after Armstrong decided to stop fighting allegations of doping, brought by the US Anti Doping Agency. There will be a lot of back and forth in the next few months about what his refusal to accept arbitration means, and the impact on cycling.

It’s a similar story with most sports doping at this point in time. The practice is so common, I’ve just stopped caring about it. When they go to strip Armstrong’s Tour titles, they will go to the second place finisher. In all but 2 cases, that finisher is an admitted doper. The technicality of erasing the records from the books won’t change the impact of those races. Lance Armstrong crossed the line first. Every time he did it, he made me believe in impossible things.

That belief has allowed me to push forward in my own life. No matter what Armstrong did or didn’t do, his impact on my life can’t be measured by his wins. Stripping him of his titles doesn’t eliminate a second of the joy I got watching him pedal up the French Alps.

It doesn’t erase the memory of “The Look”, a moment where Armstrong looked into the eyes of fellow rider Jan Ulrich and decided Ulrich had nothing left. 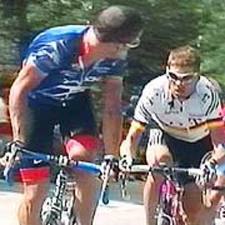 It doesn’t change the energy that moment gave me, the desire it sparked in me to keep pushing myself forward, no matter how hard it was.

It doesn’t change the impact his words had on me as I fought to get in shape and take control of my life. 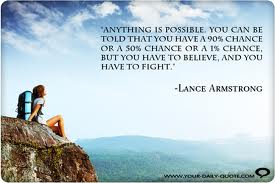 It doesn’t take away the power of the moment of victory.

I’m not a cancer survivor, but Armstrong’s words and actions have impacted me just as deeply. I’m eternally grateful for that. He’s not perfect. Then again, I’m not either