My featured workout song this week is Cher’s “This is a Song for the Lonely.”

Good beat, great lyrics, and a song that allows me to get lost in my cardio of choice.

I had a dream last night. In it, a tall man with twinkling blue eyes and a shock of white blond hair walked towards the Gates of Heaven. Saint Peter opened the gates to usher the newcomer in. The man just smiled, waved politely and kept walking.

As the man walked on, he strolled past the descent to Hell. The Devil was naturally very confused. This man didn’t belong anywhere near his domain. The Devil peeked his head out as the man strolled by without a second glance. The Devil saw Peter coming down the road and raised an eyebrow in silent inquiry. Peter just shrugged and kept walking. The Devil couldn’t let Peter solve the mystery first, so he dropped into line behind the citizens of Heaven, and the denizens of Hell followed.

A little further down the road a dilapidated juke-joint sat at a crossroad. The sign was faded and unreadable. Inside you could hear the clicking of bottles and quiet laughter. The tall man sped up as he saw the building. Reaching for the door, he pulled it open and walked in, making his way to a chair where a cigar box guitar waited. Next to that chair waited a lanky black man, idly picking out a tune on his guitar.

The tall blond man stuck out his hand. “John-Alex Mason”.

The lanky black man reached out and shook the offered hand. “Robert Johnson.”

Both sat down and Robert started picking out a tune. John-Alex quickly matched him note for note. The citizens of Heaven and Hell sat spellbound while John-Alex Mason and Robert Johnson met at the crossroads and played the blues. 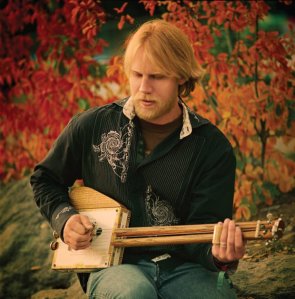 In every mental image I have of John-Alex, his big blue eyes, white blond hair, and big smile take center stage. For many, his music defines John-Alex. His music will be his legacy for many. For John-Alex, the legacy that matters will always be his children. He’s left us too soon, and they will never get to know all the elements of their amazing father. For them, I leave the legendary Skunk Joke.

When we were in Middle School at The Colorado Springs School, there was a daily morning meeting to go over things that might be important for the day. Somewhere along the way, John-Alex started telling the Skunk Joke.

Once upon a time there was a Mamma Skunk, a Papa Skunk, and a Baby Skunk.

The itty-bitty Baby Skunk said, “My in stinks too, but it doesn’t tell me anything.”

Every time he had a huge smile on his face as we all joined in to deliver the joke with him.

Twenty plus years later and I still laugh when I think about that joke. That was John-Alex. Always looking to make people smile, always looking for ways to make the day better. For many his music will continue to fill that void. For me, it’s always going to be the Skunk Joke.

Some days you gotta agree with Calvin. Miss you John-Alex.